Since ancient times, people have been trying to create an intelligent device that is capable of carrying out human deeds with intelligence. That is why we can learn about the existence of intelligent instruments in ancient Greek civilization. Although they were not called robots at the time. The first circulation of the word robot is through a stage play. The word robot is a Czechoslovakian word meaning ‘machine.’ In the stage drama, a robot built on scientific human knowledge, which later rebelled against human civilization. From there the start of the word robot.

What is a robot?

The word robot derived from the word ‘Robota.’ The term was inspired by Karel Capek, who was famous for writing science fiction in the early twentieth century. The word ‘Robota’ means slave or worker. Currently, the word Robot carries roughly the same meaning. Generally speaking, the machine/structure is capable of doing any specific task (robot). “Tasks” can be very few in addition to human-like walks or in the form of overall man-made work (Asimo, ASIMO- Advanced Step in Innovative Mobility, HuBo).

For example, an automated door, which can be open by itself or by some senses, cannot be called a robot, but it is usually called “intelligent system” because it is not a robot. But if there is any structure of Mobility / Motion, sensing ability and intelligence, then it can be called Robot.

A very typical four-wheeler car, if the driver can run without (being able to avoid an obstacle), they also have robots (large-scale Unmanned (air/ground) vehicle-> UGV, UAV). The robot can be fully autonomous (automatic), semi-automation (semi-automatic), re-programmable or human-controlled.

When it comes to direct intervention, it is possible that the robot-capable electro-mechanical structure can work. There are several sensors on the intelligent robot. It has a CPU for intelligence. There is also actuator. Field robot has a motor in the aquaculture. Sensors specified according to the demand and type of work. According to that, the program can write, the circuit is designed. Starting from the torch, everything was done by simulating before the creation and made according to the design.

Robotics is a computer-controlled automatic machine design and production related science. Robotics is the name of the science or branch of the robot. Robotics is a branch of technology that deals with the design, construction, operation, and implementation of robots. According to the New Collegiate Dictionary, “Robots are an automated system that works like the way humans can work, or it seems like it’s intelligence. George Dabble, who first invented the first digital and programmable robot, was called the father of robotics.

What is being studied?

Research trends in robotics are different in different fields. As mobile robots are working more on path planning, the main focus on industrial robots is to increase efficiency and reduce costs, so control/tracking is working more. Spaces and Humanoid robots have more work to do with design/balancing / minimum energy. UGV / UAV does more than tracking/sensors. Medical robots and went quite well. The lost hands in the accident are now replaced by artificial arm or leg. Now the surgery is being done with a robot.

Apart from the many worm insects, the facility of robot structure/stability analysis is used, later the ideas used according to the field. Different sensors are being developed to increase artificial intelligence. Besides, various methods of sharing information between different pest and owners are being added to the robot control. Various algorithms like neural networks are constantly adding to it. Human suffering and anger are being tried and tried.

The working process of Robot

In the current world, robots are a growing field. It can say that in the next 30 years, the number of robots in the world will surpass the personal computer and there will be at least one robot in every room. Many of us understand robot as a machine whose human shape, such as hands, eyes, can speak, etc. In fact, most robots have no hand or human shape. Robots are basically an embedded system. Because the system is called embedded, here many systems are integrated together. There may be many examples of embedded systems. For example, an example of an embedded or robotic system that many of us have for free in the home. But, how?

It can be seen here, a mechanical device of less pressure. The electronics system is connected to it. This software is controlling the mechanical and electrical system, which is checking the temperature. So here’s the mechanical, electrical and computing system, the three systems are working together, which is an embedded system example. Robots are also an embedded system, where several systems work together. Although, there is a sense of the robotic system, starting robot construction is slightly difficult. It is difficult to start because robot makers to have ideas about some systems and know how to build machines.

Where is the robot used and why it used?

The first robot needs to generate from the industrial application. Thinking from the power of human energy Starting from the ability to work in a microscopic motion, motion-resolution, motion-precision, acarus, repetitive acarus, efficiency, dirt or extremely high or extremely low-temperature conditions.

Unstoppable work/employment can use

Different types of work can do

In all cases, people cannot afford to do dangerous things

Robots do not get sick; they can work 24 hours without any complaints.

People in the factory can lose their job

It requires electrical power to operate

It requires care to keep it operational

Need money to make or purchase a robot

Where are the robots used?

The fact that people cannot do things in the industrial factory is doing with the help of robots. Moreover, robots can work with extreme hype, and the use of robots in the industrial areas increases production much more. As a result, the institutions are fast growing and can compete with other established organizations. 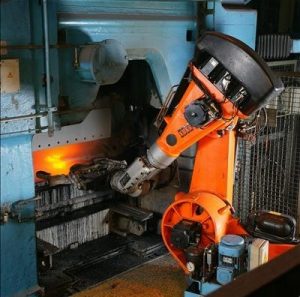 The above picture shows that a robot used to melt solid metals. The robot is working with precision and quickness in very high heat, where people cannot even think of staying away from doing work.

There are many jobs in the industrial sector that are very difficult for humans. But, with robots, they are going to be super-fast. Nothing is comparable with robots. So hard work is done easily with robots.

Robot in the medical field

Use of robots in the medical field is noticeable. Last year I read in the magazine that the work of creating a robot is so small that it will be inserted into the body of the body through syringes and will control any virus or bacteria by controlling it from the outside. And the main purpose of creating that robot is to use cancer cells to destroy.

You may know that there is no better promise of cancer. And every year, millions of people die in the world just because of cancer attacks and due to lack of proper treatment, in that case, when a robot created, a revolution in medical science will happen. So now that the medical science is not using robots, it is not. The use of robotic use in medical practice has been widespread, and robots have huge tasks in this sector, from the onset of surgery to rehabilitation, automatic robots are used to automate hospital rooms for germination.

Robot in the study or Research

Robots have been using the research for a long time. The first robot made to help the people. There is a lot of work that a normal scientist will do a few years to do it himself, but using robots can be done in a few days. Apart from this NASA, along with many different organizations, has been using regular robots, and many of them are in space. We know much about space in the field of robots and modern telescopes. Now the robot is also using in agriculture as well, the soil of which tested with the robot. What kind of crops can produce on the soil, what fertilizers, an insecticide should use, these robots say us.

The robot has started teaching in South Korea for a long time. In other developed countries, now using robots as a teacher. Robots are used to describe various assignments of students.

Robots like humans are called Humanoid Robot. These are Synthetic organisms that look like humans. Humanoid robot robots are free. They can adapt themselves to the environment. If they are sent to any target, if there is any obstacle in the way, they thinking about themselves and reach their desired goal. And this is the main difference between Humanoid Robot with other robots.

Humanoid robots are created by imitating in such a way that robots can perform tasks like a human. Humanoid robots are composed of many types of scientists and specialists, such as doctors, engineers, linguists, and so on. Since these manipulated by humans, their system is an independent and very complex than other robots. One of them has sensory or senses, the ability to adapt itself to the environment, the ability to work independently in adverse environments, and the system itself has many systems, including the system itself.

Humanoid robots can use their foot and can run independently like the human. However, it is a matter of regret that these robots cannot jump like a man. It’s a big problem.

Some features or capabilities of human robots

The ability to learn independently – the father who can be dangerous. Because they can learn from the environment without the help of anyone else.

There is artificial intelligence, with which to decide the environment can decide.

The next generation of robots

The current robot and its design compiled by combining many branches of many sciences, robotic designs combined into mechanical engineering, computer science, electrical engineering, and all of this. Next Generation robots will more advance, and their intelligence levels will be much higher. As soon as the smart home and the Internet of things will popular, robots will see as much and the robots at the Consumer Level. Future robots will be made using artificial intelligence, and with the help of the neural network, they will have the power to think like a human. Of course, many science fiction terms will get a bit of a hurry, as can be seen from a large number of nanobots.

Micro and nanoscale robots will be improved, which can move in your body easily. These robots will be able to communicate with different robots and to complete various tasks. Diagnosis of the human body and the correct surgery are the biggest task of them. These micro and nanobots will have their own clear idea, about what they are doing and they can work independently.

The robot will work as the main partner of the people in almost all the future. For that purpose, the use of a robot with artificial intelligence is extending day by day. The technology companies are taking steps to improve the industry. Considering it well, it can understand that future robots will be much stronger, and they will use for many more purposes.